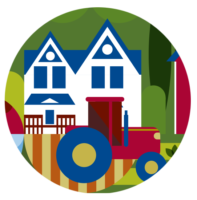 Keith Ahrenholtz, a 57-year-old crop and hobby hog farmer, might as well just go ahead and invest in a tuxedo. Why the unlikely wardrobe choice? Well, Keith has a lot of celebrating to do in the coming year–four of his five children are engaged to be married.

“And three of them are girls!” Keith said.

It is indeed going to be a busy, fun (and expensive) year for Keith and his family. But, family weddings aren’t the only reason Keith has to celebrate. He is also a cancer survivor.

In 2015, doctors found a mass on Keith’s kidney and suspected it might be cancerous. After performing surgery to successfully remove the mass, it was determined that it was, indeed, cancer.

After the detection of the mass, but prior to the surgery, a Platinum Supplemental Insurance sales representative coincidentally stopped by to visit Keith and his family at their Shelby County, Iowa, farm to review the family’s existing policy. It was during that discussion with the rep that Keith mentioned his upcoming surgery.

Like many policyholders, Keith was a bit foggy on the details of his existing policy. And, this visit was particularly timely.

“I had previously taken out the supplemental policy, but didn’t remember much about it,” Keith said. “And the representative reminded me that if the mass ended up being cancerous, I should file a claim. Well, it did end up being cancerous.”

Keith recognized the value in the policies Platinum markets and, only a few short weeks later, he was able to take advantage of some of the benefits he qualified for: he tripped over some of his wife’s oxygen equipment, fell and broke a rib.

“I joke with my family that what I’d really like to say is that I tripped and fell on the ice when I was farming,” Keith said with a laugh.

After visiting the doctor and having an X-ray to confirm the rib fracture, Keith easily filed a claim and received benefits. Keith’s out-of-pocket expenses associated with this incident were minimal, but he was able to put the money to good use by taking care of some bills associated with his treatment.

And, he might have even put a little aside for that tuxedo.