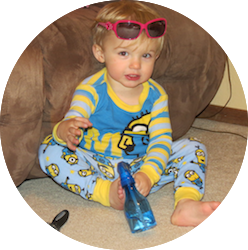 Coverage and Care When It Counts

Little did Angela Thomsen know that just weeks after purchasing a supplemental insurance policy marketed by Platinum Supplemental Insurance, she would be taking a trip to the emergency room with her 2-year-old son James.
Angela and husband Jeffrey are farmers in Olin, Iowa, and they have three young children: 3-year-old Claire, 2-year-old James and 1-year-old Audrey. Being a young, active family, the accident and hospital indemnity policy made a lot of sense for them.

But, when Platinum agents initially stopped by the Thomsen farm to present the policy to them, Angela was skeptical. “To be honest, my first reaction was, ‘I do not want to pay for more insurance. I feel like we are insurance-poor with our regular major medical insurance.’ But, I agreed to hear them out.”

“They [the agents] were both very nice and helped us understand how the policy would benefit us, and that really changed our minds,” Angela said.

After the agents reviewed the policy with them, the Thomsens ended up changing their minds.

Only six weeks after Angela and Jeffrey purchased the policy, their middle son, James, was playing in the bedroom, fell off the bed and—you guessed it—bumped his head. While minor, the accident did require a trip to the emergency room, since he ended up with a painful gash. But, other than requiring about four stitches, the little guy was just fine.

And, through every step of the process, Angela and her family’s Platinum experience has been stress-free.
“Overall, the people at Platinum have been wonderful, and I’ve had no problems,” Angela said. “From the sales person to when I had to call in to make the claim, to receiving the payment, everything went smoothly.”